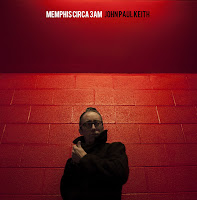 John Paul Keith, a Memphis-based singer-songwriter and guitarist, is about to release his second album, Memphis Circa 3AM. Keith is playing a familiar mix of rock, soul and country influences and is a terrific songwriter.

The album is produced by the truly legendary Roland Janes—house guitarist for Sun Records in the 50s and longtime engineer and producer at Sam Phillips Recording Service. “When you think about the sheer scope of the work Roland has done, it is intimidating,” Keith says. “So many of my favorite records he either played on or worked on in some capacity. Working in there, I had to put it out of my mind. You can’t get anything done if you think too much about it. But Roland never brings it up. He immediately makes you feel comfortable. It became clear to me in my first meeting with Roland that he had no interest in doing any sort of nostalgia project. He wants to do something new and fresh and creative. It really helped us work."

We'll have more to say - the album is due out September 17 on Big Legal Mess/Fat Possum, but Keith's heading out on tour later this week. Tour dates and more info, including pre-order, at the sites below.