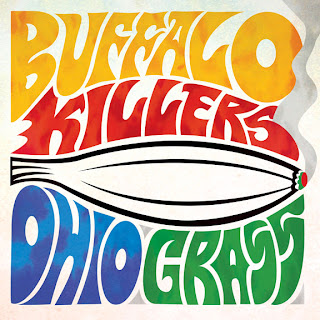 Cincinnati's Buffalo Killers are still playing their heavy psychedelic guitar (emphasis on guitar) rock, and on Ohio Grass they're better than ever. They swing from the heavy, foreboding rock of lead track "Baptized", with its guitar attack that builds slowly to an overwhelming crescendo, to the sweet, reggae-influenced "Golden Eagle", and it's all festival-worthy hard rock. Here's "Golden Eagle", with some Crazy Horse-style guitar over the last 2:00 of the track:

"Hold You Me" continues in the vein I thought marked a lot of their previous release Dig. Sow. Love. Grow. - a style that is pleasantly reminiscent of the easy, loping boogie of The James Gang.

This is an extended version of a 6-track Record Store Day vinyl-only release with four new songs added, including live versions of "Hey Girl", "Jon Jacob" and "Move On". As you might imagine, their live sound is notable, too, and features extended guitar solos... even more guitar to love. Get it from Alive/Naturalsound, or read more at their website. It was released last week (Aug. 20).