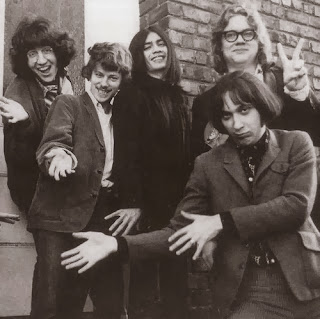 We saved the best for last in our final installment of the 2013 Friday Nuggets series.

No band captured the garage rock / power pop / pre-punk sound and ethos better than the Flamin' Groovies, certainly one of my favorite bands of all time.

The Flamin' Groovies were founded by Cyril Jordan in San Francisco in 1965. Their best work was done in the '70's when they released four consecutive great albums - Teenage Head, Shake Some Action,  Flamin' Groovies Now, and  Jumpin' in the Night. Like a lot of the garage rock that we've featured here at Friday Nuggets, The Flamin' Groovies were heavily influenced by British invasion rock and roll (in their case, especially The Rolling Stones), Motown, and California pop, which they merged into a super amped up, fast and loud speedball, with copious amounts of psychedelia thrown in. It's a winning and timeless combo.

"Shake Some Action" (1976) is one of the great American rock and roll songs, and became by itself a
significant blueprint for the best American bands of the '80's - R.E.M., the dBs and The Replacements:

The first Flamin' Groovies song I ever heard was "Slow Death", released in 1972. It got some airplay on WABX in Detroit. My friend Steve, always a step ahead of every other kid at our high school, was into it. It's gotta be the best anti-drugs rock and roll song ever written. Here's an absolutely blistering live version from a French television show in 1972:

Another classic of theirs is "Jumpin' in the Night", the title track from their 1979 LP, inexplicably never released as a single or pushed to radio even though they were on a major label at the time. How this was not a major hit song is a great mystery:


The Flamin' Groovies went through many personnel changes through the years, broke up and reunited only to break up again. Various members went on to do great stuff with other bands, but the magic of The Flamin' Groovies has endured. Much like their 1970's Southern cohorts Big Star, the band is far more revered today than they were at the time.

Cyril Jordan and the current incarnation of the Flamin' Groovies played a few shows this year, in San Francisco and in Australia for the Hoodoo Gurus' Dig It Up festival.

Merci beaucoups for the shout-out. Really enjoyed listening to these. Speaking of nuggets, I just found out Rich never heard 2+2 or Lucifer.