A Merry Christmas from Ballboy 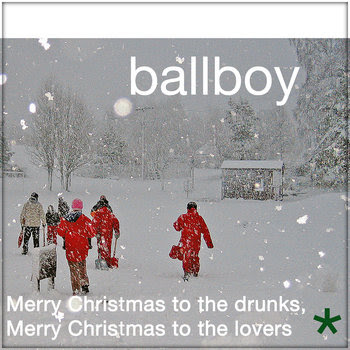 I generally don't seek out Christmas songs by modern artists, but for me Ballboy isn't just any artist.  And my faith in their art is justified by Merry Christmas to the Drunks, Merry Christmas to the Lovers, a mini-album they released for the holidays.  Consisting of six tracks of indie pop/modern folk that will nudge the nostalgia sensors in your brain and tug on your melancholy heartstrings.  Here are the opening and closing tracks; you can stream/purchase the record at the Bandcamp link.  You may well find that these songs will become a regular feature in your holiday playlist.


Ballboy is Gordon McIntyre, Nick Reynolds, Gary Morgan and Alexa Morrison.  Additional assistance was provided by Lucy Pringle and Katey Lee.  Merry Christmas to the Drunks, Merry Christmas to the Lovers was recorded by Pete Harvey at Pumpkinfield Studios in Perthshire and Gordon McIntyre at Housechurch in Edinburgh, and was recorded live with the members facing each other.