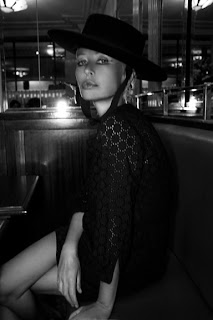 Wendy James, former lead singer of Transvision Vamp is now working with The Stooges' James Williamson (guitar & bass) and The Bad Seeds' Jim Sclavunos (drums & percussion) on an album and in advance of that, has plans to release a double single consisting of covers of The Rendezvous Band's "You're So Great" and Dylan's "It's Alright Ma (I'm Only Bleeding)". I'll do a little more research on her solo career, which I will admit I was not aware of, but for now, holy cow! Check out these songs:

Here's the stream of "It's Alright Ma", a really provocative take:

Apparently it was Williamson's idea for Wendy to pick her favorite Dylan song, and she's done it right. A good Dylan cover is a great thing.
Posted by John Hyland at 9/23/2012

The cover of "It's Alright, Ma" is based on the live version Dylan played quite often in the early 2000s.