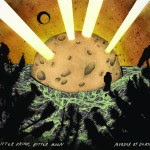 Murder By Death's new record Bitter Drink, Bitter Moon is out today (Sept 25) via Bloodshot Records. We wrote about them earlier this summer, noting lead singer Adam Turla's rich baritone and the rocking pace they set on the advance cut "I Came Around". That is one of the more uptempo cuts on the record, but the whole thing is carried by Turla's voice and an overall feel of foreboding.

"Lost River" features some dark lyrics and, as on most of the record, the sweet sound of Sarah Balliet's cello serves as a counterpoint to Turla's vocals... but there is usually some uptempo rock not far behind. In addition to Turla and Balliett, Murder By Death consists of Matt Armstrong (bass), Dagan Thogerson (drums) and Scott Brackett (piano, trumpet, accordion, mandolin, vocals, percussion). Armstrong and Thogerson supply a strong base for the guitars, horns and strings that do so much to supply a striking mood for this record. 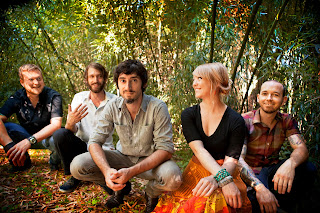 Turla says yes, the band was named after the movie... which was a comedy. But reading the interview that accompanies the stream below, you'll see that his three favorite current authors, cited as influences on his writing, are Steinbeck, Hemingway and Garcia Marquez... perhaps supplying some explanation of the darker mood and haunting and surreal lyrics.

This is their sixth album but their first with Bloodshot. I see it as a terrific fit. Bloodshot is the label of literate, sometimes dark country-influenced rockers like The Waco Brothers, Chris Mills and the early Old 97's - so there is precedent for a band of Murder By Death's style.

You can currently stream the whole album via MTV Hive:
http://www.mtvhive.com/2012/09/17/murder-by-death-bitter-drink-bitter-moon-album-stream/.

The Bloomington, IN-based band will head out on tour with Say Anything in October. Tour dates here.