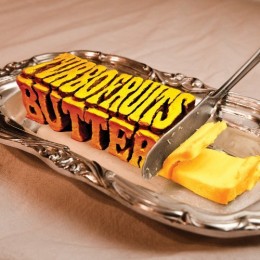 Nashville is still Music City USA. It's just that, with the presence in Middle Tennessee of rock bands like The Turbo Fruits, Jeff the Brotherhood, PUJOL, Wild Cub, The Excuses and the Ettes, that moniker no longer refers specifically to the country stuff they're making over on Music Row. There is a burgeoning rock scene - all over Nashville and Middle Tennessee - and many folks here will tell you their favorite band is The Turbo Fruits.

Their new album Butter is a pretty straight-ahead rock record, but it hops around a bit between what's commonly called "garage rock" and some of the glammier stuff you might expect from, say, The Strokes - or, going back in time, maybe Marc Bolan. What they have in common with those other bands I mentioned is an attitude - and real skill at combining punk, glam and good old guitar rock. 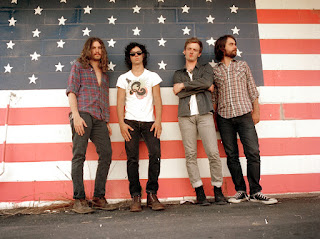 Most of the record features a pretty fast pace and wild guitar work - from opening cut "Where The Stars Don't Shine" with its heavy bottom and fast psychedelic guitar lead,

--to the punk metal of "Ain't The Only One Having Fun":

and surf-rock workout "10 Years" and club fight anthem "Don't Like To Fight".

But lest you think that's all they've got in their bag of tricks, they vary the tempo and produce some quality songs that almost pass as ballads: "Sweet Thang" has a plaintive quality that wouldn't be out of place on a Walkmen record and "Catch & Release" swings fairly gently, albeit with plenty of tasty electric guitar licks. The record is terrific, and a lot of fun to listen to.

Butter was released last week (9/11) on Serpents and Snakes Records... you can buy it from the band at Turbo Fruits website.