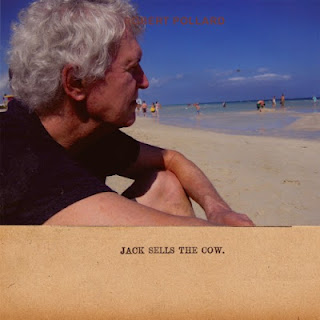 Robert Pollard's latest release, Jack Sells The Cow, is a demonstration of a property that his fans are very familiar with: that Pollard is capable of putting out a high-quality album almost monthly.

In what might be a bit of a theme, several of the songs swing between beat-heavy, sludgy verses and catchy, almost poppy guitar-laden choruses... "Heaven Is A Gated Community" hammers home the line "I wanna go with you" over and over, until it releases with a plaintive "Will you go with me? Will you let me know?" The second song, "Take In" features jangly guitar and a soaring multi-tracked Pollard vocal, but again, over a pretty heavy rhythm section.

"Who's Running My Ranch" is probably the best example, and perhaps the best song on the record: there's the solid drum/bass line propelling the song along until the release - again, jangly guitar and that glorious British accent intoning lines like "But if you want to/but the ass won't kick" add texture to the heavy rhythm base.

But wait until you hear some of the surfy guitar lines in "Up For All That" (echoes of the Drifters' "Up On The Roof", anyone else?) and the super-jangle of "Pontius Pilate Heart", the best song on the record. Wait, didn't I just call "Who's Running My Ranch" the best... oh hell, they're all favorites. Or, more to the point, they all will be, in time. You will tap your feet to "Big Groceries" - you won't have a choice.

Here's "The Rank Of A Nurse", which features a somewhat tremulous vocal and one of the more restrained guitar lines (for the first half!):

It's an interesting record - all the songs clock in between 2:00 and 3:30 and I'd say this is a little poppier, a little catchier - but at the same time, a little heavier - than Mouseman Cloud, Pollard's previous 2012 solo release... and they make a nice pair.