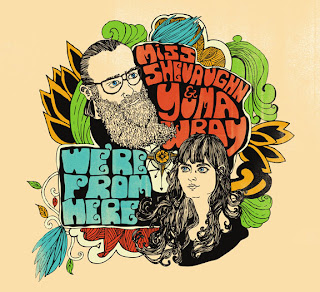 Miss Shevaughn and Yuma Wray have put together a debut record that is simply stunning in its scope and in the sheer size of its sound. We're From Here is a title that apparently grew out of an answer to the question, often asked, "Where are you from?" Shevaughn grew up in Arkansas and Louisiana, and Wray internationally, but their most recent permanent home was Chicago, as good an American music melting pot as you could think of. In working out the songs that comprise We're From Here, they apparently took up residence in their van and travelled the country. Similarly, they imposed no limits on their music.

On beginning to listen, I am reminded of Gillian Welch and David Rawlings, but that's probably too easy a comparison - after all, anybody can see that the band consists of a female folk/country/rock crooner and an ace guitar player. Although it would appear Shevaughn's an ace guitarist herself... Another comparison that came to my mind in listening to this record a few times over was "kd lang fronting Uncle Tupelo". But then, there are those guitars...

"Make It Out Alive" is an amazing song, one that owes as much to Springsteen as to, say, Emmylou and Gram. It's roots rock with some big-time guitar slinging. Similarly, "Lost My Way" reminds me of Eleventh Dream Day or Sonic Youth, just some tremendous guitar work. 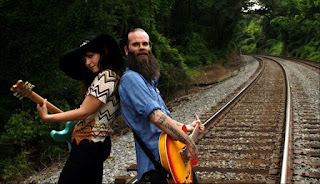 But on songs like "The River Made Me Do It", Wray provides some fairly restrained picking over the first two or three minutes, which allows Shevaughn's voice to stay right on top. She's an excellent country-rock vocalist, seemingly comfortable with any type of song... and Wray's always ready with some wicked, ragged electric guitar to punctuate things in between choruses.

And there are dead-on folk songs like "Factory Clock":

Check out the guitar work on this instrumental, "Mi Burro Esta En Fuego" - a rough mix from their recording process:

There's not a bad song on the record - Wray's a good vocalist, too, and he takes lead vocals on a few of the songs here: "Make It Out Alive", "Keep On Wailin'" and "Cloin's Lament".

Mostly, though, this record is recommended if you like guitars. Whether plucking and bending the strings, as on the pretty "No Grave To Brush The Dust From", or shredding, as they do throughout most of the rest of the album, the quality of the fretwork is uniformly excellent... this is a tremendous debut. It's out today (9/11) and you can learn more at their website, or buy it directly from the band here.