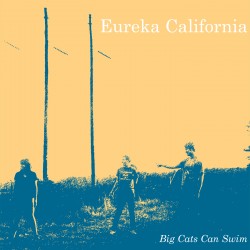 Eureka California is an Athens band playing delightful garage rock - British invasion-influenced stuff that is really catchy, raw and kind of psychedelic, in the vein of the Nuggets comps or, say, 13th Floor Elevators or early Pink Floyd - or jumping forward to some of the Paisley Underground stuff like Rain Parade. Big Cats Can Swim is a really good record... as in, the more I listen, the more I like.

And here's a video of them playing out in Athens: