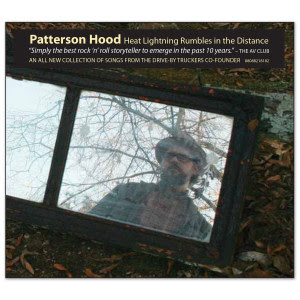 Patterson Hood's new album features a title that couldn't be more apt. Heat Lightning Rumbles In The Distance summons thoughts or memories of hot, languid nights spent reflecting on things far away... and that's kind of what the record is about.

A little background: According to Hood, the album started as a book, based on his turbulent experiences after moving to Memphis in 1992. “I was 27, my band broke up, I got divorced… my car got stolen, our band’s truck got stripped and I fell in love. I fell out with my family (who I was very, very close to) and had my heart broken.”

So it's been in the works for a while - in essence, most of Hood's adult life. And the consistently high quality of this record shows that. Hood, again: “The songs begin in the period that the book was set in, but don’t end there, as they really just were the impetus for writing about the life I am living now and contrasting it with the troubled times of two decades ago."

Living a good life - while reflecting on a distant past when life wasn't so good but we lacked the perspective to know better - what better material for an artist as talented and reflective as Hood to make into his best record? The record is rich, deep and beautiful. I could write paragraphs about how many wonderful little touches embellish this record - the :45 intro to the title track is as good as R&B-flavored Southern rock music gets, for example, and then it gets better. And I believe the bass lines merit special attention. I'm not sure I could tell you which lines are played by his dad, and which by Hood himself, or which by Cooley, and I'm not sure it matters. They are all wonderful, yet somehow understated, and create a very comfortable atmosphere for every song on the record. But I really don't know how much you need me to tell you about this record. If you like storytellers, if you like Southern rock -- or any kind of rock, or country, or R&B, this record is well worth your time.

Here's a video of Hood singing and talking about "Depression Era", which was actually written and recorded for a film in 2010:

When we first got word of this record, we put up a post featuring a free download of "Come Back Little Star", Hood's ode to dear departed friend Vic Chesnutt. You can find that post here.

In fact, you can stream the record right now at Rolling Stone.

Hood is not holding anything back on this record. As good as his previous work has been, consider that he's held back some of this work for 20 years while he polished and honed it - and it shows. And he's assembled a cast of bandmates, friends and family to help him realize his vision for the record: Drive-by Truckers Mike Cooley, Jay Gonzalez, Brad Morgan and John Neff, as well as Scott Danbom and Will Johnson from Centro-matic and Kelly Hogan (who co-wrote "Come Back Little Star" and whose vocals on that song are a highlight). Hood’s father, famed Muscle Shoals bassist, David Hood also plays on the record. [As do David Barbe and Jacob Morris - thank you to commenter "Anonymous" for pointing out my oversight!] In short, Heat Lightning Rumbles In The Distance is a masterpiece - as much as I've grown to like the Truckers and Hood's other work, this is simply the best record he's ever made.

The record will be out next Tuesday (Sept 11). Hood and his band The Downtown Rumblers are going on tour to support this record:

I love this record, too. Thanks for writing about it. Patterson is one of the best songwriters around. Also, as a super-fan, just want to add that Heat Lightning Rumbles In The Distance also features Athens' stalwarts David Barbe on bass and Jacob Morris on cello. Can't wait to get my hands on the vinyl and see them on tour!