There was a time when the music scene in Finland was famous mostly for the multiple types of metal music it produced.  But that time is in the past.  The current scene contains a plethora of bands recording high quality music in other genres, and a fine example is The New Tigers, whose self-titled LP of noise pop is one of the out of left field surprises of the year.  It only features eight tracks, but two of them are in excess of eight minutes, so you aren't being short-changed.  Here is the album's opening track --

The next track is the lovely dream pop of "Velvet Jam".


The members of the band are Appu (guitar, vocals, glockenspiel), Valtteri (guitar and vocals), Janne (bass and synth), and Kece (drums).  Their hometown is Turku, Finland.

The New Tigers is an album for fans of the electric guitar.  Not metal-shredding guitar, but melodic, chiming, fuzz-drenched layers.  It will remind you of young Teenage Fanclub and Sonic Youth.  If you are like me, you'll get this album, put it on, and find that about nothing else you have can knock it off your playlist.  By the way, my favorite song on the album is the sixth, "Door on the Floor".  I think it is the way The Jesus and Mary Chain would have sounded if the Reid brothers had been happy.  And for those who want a slow dance, "Transitions" in the number seven slot fits the bill.


Here is a picture of the lads in front of the house they will buy if all of you purchase their album.  [Editor's Note: Scott may be wrong about this picture, as his knowledge of Finnish is highly suspect.] 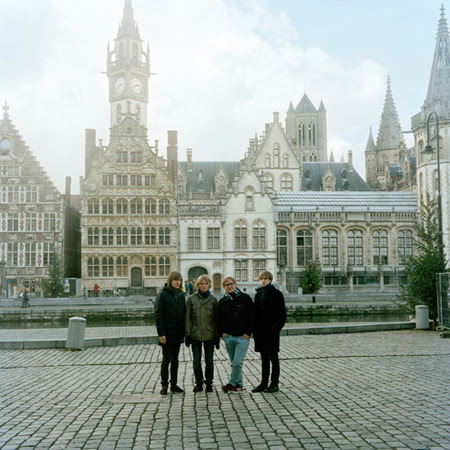