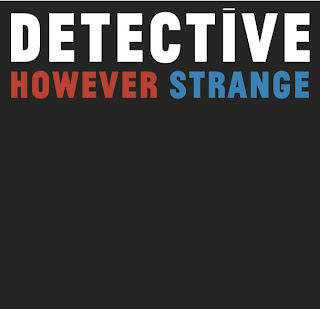 LA-based band Détective is Jim Greer (a former member of Guided by Voices), Rory Modica, and Guylaine Vivarat, a wonderful female vocalist. On their latest record, However Strange, they are playing an engaging brand of artistic, Velvet Underground-influenced postpunk that old-school fans of 90's indie rockers like GbV, Sonic Youth and The Breeders will certainly recognize - but one need not be a GbV fan to enjoy this music.

To give you a sense of their sound, here's a video from their immediately preceding EP, Basket of Masks, "Rhodesian Man":

And here's an audience video of "Holy Ghost Citizens Club" from However Strange:

Really, anyone with a taste for high-quality guitar rock ought to give this record some attention. Of course, if you already know the song "Trendspotter Acrobat", well, that doesn't hurt... Check out this link for Greer's description of how he wrote that song for Sunfish Holy Breakfast. There's an updated version on this record, and it's terrific.

Before that, though, there are eleven delightful slices of guitar rock. "Man Near the Surface of the Earth" starts out with Vivarat humming, jumps into a jangly guitar line, and then her vocals rise over the guitar to achieve a sort of transcendent effect. "Basket of Masks", which was also on the EP we wrote about earlier this year, has a nice strummed guitar line that builds tension and an understated Greer vocal, and in the middle is a noisy guitar solo. "Amber" continues the interplay between Vivarat's high, sweet voice and the ragged, jangly postpunk guitar. "Telephonia" is sung as a duet, and as on the rest of the record, features strong guitar lines throughout. Further on, "Cuba" is an instrumental, a very cool guitar soundscape.

You can listen at Bandcamp:


And you can buy the cassette from Burger Records, click here.

I see on a recent date, they played a triple bill with Seapony (read Scott's review here) and Sweater Girls (keep an eye out for a review on their delightful new record soon). If you're familiar with those bands, and the kind of music Burger has been putting out, you've got an idea what to expect from Détective. Good stuff. Vivarat's voice is engaging, the guitars are great, and the songs are consistently good. The record holds up very well.
Posted by John Hyland at 9/27/2012