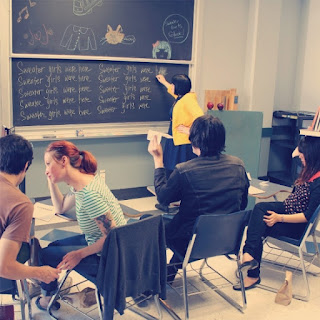 Sweater Girls are a California band featuring super-sweet female harmony vocals, jangly guitars and a bit of a punk backbeat... and boy, is their music catchy. Their new album, Sweater Girls Were Here, is a celebration of Southern California very much in the way that Best Coast's and The Go-Go's music was, and there are similiarities between them, but differences too. Sweater Girls don't have quite as much reverb, and probably a little more jangle on the guitars, and most of all, there are times you could overdose on the harmony vocals - so light, high and sweet are they. Check out lead track, "Infatuation Street":

I think "Fast Forward" is my favorite song on the record, and for a good portion of the song, the girls are just singing "La la la, la la la" over buzzsaw guitars and that nifty backbeat.

I think when a band has a sound that works for them, they are well-served by working to perfect it and sharing it with the world. Based on Sweater Girls Were Here, I think Sweater Girls have the same philosophy. 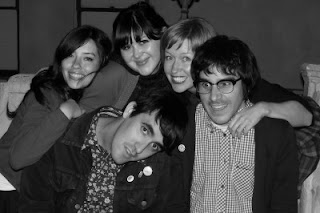 As I mentioned in my review of Detective's However Strange, I had read that a recent show in LA featured Sweater Girls, Seapony (which we also like a lot and which Scott reviewed here recently) and Detective. Here's a video from "Part Time Punks"... Starts out with Seapony, Sweater Girls at about 3:10 and Detective at 4:55. Lucky audience...