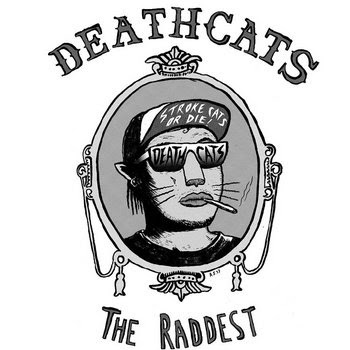 James, Harv and Scott are Deathcats.  We featured them (and their free download) a few months ago.  The guys haven't been slacking since, and now are unveiling The Raddest -- a four track EP via Fuzzkill Records.  That's four tracks of punk energy, garage ethos, pop hooks and surf guitar.  Check out two of the great tracks below.  The first is "I Wish It Was Summer", presented in the form of a fun video in which our heroes compensate for the lack of summer and beaches with a party full of props.  The second is the dreamy closing track, "Cowabunga Surf Jam".

The Raddest was recorded by Chris McCrory (of Casual Sex) at Shady Lane Studio and mastered by Sam Smith (of Casual Sex) at the Green Door studio in Glasgow.  It is available from December 9 as a cassette with a digital download.