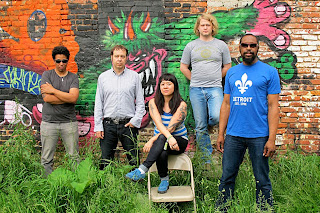 Garage rock is neither a lost nor stagnant art. Nor is Detroit a lost or "bankrupt" city.

So our thoughts this week bring us back to our beloved hometown of Detroit. And few bands carry the torch for garage rock better than The Dirtbombs, formed by Detroit garage punk legend Mick Collins (The Gories) in 1996. Following a Noah's Ark philosophy that if you want to survive and thrive, two is the way to go, The Dirtbombs are a rotating ensemble known to feature two drummers and two bass players.

Collins had this to say about the label "garage rock": "A real garage band is like a 1960s punk band heavily influenced by R&B. These bands nowadays calling themselves garage bands are not. They don’t have it. They have vintage gear. They copied a bunch of Humble Pie riffs, and that’s the extent of it. That isn’t garage.”

This on the other hand, is garage: