REVIEW: The Spook School - Dress Up 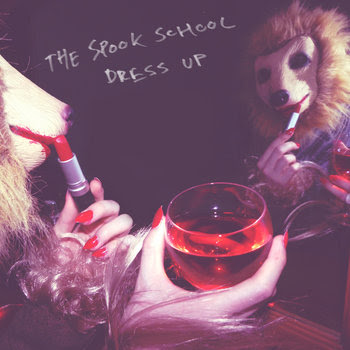 Some maintain that The Spook School are a C86 indie band masquerading as a punk band.  Other observers assert that the Edinburgh quartet is a punk band playing C86 guitar pop.  Clearly, a professional opinion is required to resolve the matter.  The answer, dear readers, is "yes".  Twee punk or punky twee?  Does it really matter?

I am too lazy to count how many times this band has appeared on these pages, but suffice it to say that the number is large enough to evidence either a personal fondness for their music or that the pictures from college that I had been assured were destroyed have instead fallen into devious hands in Scotland. I maintain that the simple truth is that these kids pack an incredible amount of energy, humor and melody into fast-paced two and three minute pop songs.  The bass bounces with authority, the guitars buzz, clang and jangle, and Niall spanks the drums like an angry headmaster.   And their ability to address serious social issues without weighting down the tunes suggests a more mature hand at songwriting than one might have expected at this stage of their career.  And speaking of writing, one might peruse the band's website to read the collection of offbeat and occasionally outrageous love letters Niall has written to other bands.

The multifaceted approach encompasses punk, twee, grumbling indie rock and a touch of folk rock.  It is like a semi-unholy merger of The Flatmates, Buzzcocks and Beat Happening.  Picking songs to give you a taste is enjoyable and easy, because I think they are all good.  But here are four that should convince you to go to Bandcamp and stream the album.

The Spook School is Nye Todd, Adam Todd, Anna Cory, and Niall McCamley.  Dress Up is out now via FortunaPOP on vinyl, compact disc or digital download.  See the Bandcamp link below for details. You probably can find it on iTunes and other digital outlets as well.

And if the pictures I mentioned in the second paragraph, which never existed by the way, are published on the web, I assure you that any resemblance to me is photoshopped.