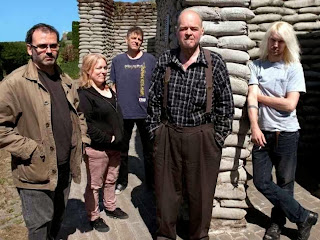 Pere Ubu, a recent photo above, have been doing their wonderfully unique and challenging thing since 1975 when they roared out from deep within the Cleveland underground with some of the most thoughtful, art damaged music the rock world had ever seen. Their outrageous and brilliant frontman David Thomas was as much a poet, performance artist and provocateur as singer. And against all odds, Pere Ubu, which is really Thomas and a rotating cast of always top flight avant garde rock musicians, are still doing their thing. In fact, as I write this I am preparing to go see Pere Ubu tonight in Portland right before this blog piece appears.

This being a Nuggets feature, we will give you one from the very early days. While certainly not "garage rock" in the narrow sense of the word, Pere Ubu certainly was influenced by Captain Beefheart, The MC5, Lou Reed and plenty of stuff that loosely falls under the banner we salute every Friday here. Thomas once, as somewhat of a joke, referred to Pere Ubu as "avant-garage", and the term stuck.

One of my all-time favorites of theirs is "Non-Alignment Pact" from their brilliant 1978 debut record The Modern Dance. What a chorus!  And the Tony Maimone bass lines are absolutely killer.


Okay that sounds so good, you get one more, their very fist single "30 Seconds Over Tokyo" released in 1975. Trust me, nothing sounded like this in 1975, but you certainly heard it in Television, Patti Smith, Talking Heads, Gang of Four and the wave of great avant rock that followed Pere Ubu:


If you wonder what Pere Ubu are up to today, Matthew Singer wrote this very fine piece in a Portland weekly this week previewing their show (link here).  Pere Ubu recently released its 15th studio LP The Lady From Shanghai.