REVIEW: The South Side of Soul Street: The Minaret Soul Singles 1967-76 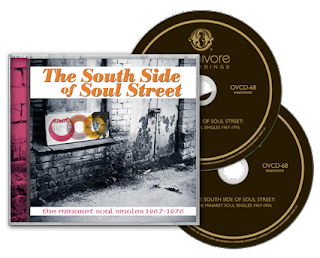 New from the Omnivore Recordings team is an exploration of Deep South soul music, The South Side Of Soul Street: The Minaret Soul Singles 1967-1976. Minaret was a label formed in Nashville, but moved to Florida, where it operated for the duration of its lifetime. This 2 CD, 40 track collection gathers all of the A-s and B-s of Minaret’s output for the very first time. Many of these tracks have been out of print for a long time and very much in demand.

Artists featured on here include the great soul singer Big John Hamilton, whose tracks include the Fenton Robinson-esque "The Train" and several cuts that wouldn't be out of place among the ouevres of Otis Redding or Wilson Pickett. There's Genie Brooks, who's got a little bit more of a James Brown feel to his voice and a strong gospel-style backing, as well as fine piano and twangy Southern guitar licks. The overall feel of this set is mid-60's Southern soul music, and anybody who loves Stax and Muscle Shoals music and is yet unfamiliar with the likes of Big John Hamilton (who sings on about half this collection and is credited as a writer on more than that), will find this a true delight.

In addition to the soul ballads, and some heavy soul revue fare (like a killer duet cover of Buddy Miles' "Them Changes" featuring Hamilton and Doris Allen), there's some mid-70's funk, and it's very well done, with the thumping bass and chicken-scratch guitar that characterizes the best of that genre. On the first disc, "Sewanee Strut" is a good example of that, and on the second record, "Double Funk" from LRL and the Dukes (Leroy Lloyd is credited as the writer):

The second disc then closes with two more Hamilton cuts, "I've Got to Get Myself Somebody" and "Free Me" - familiar soul sentiments rendered in a familiar soul music format by a formidable vocalist with a superb backing band. If you're a crate-digger, maybe you already have some of this, but it's unlikely anybody has it all. That's what makes this latest Omnivore offering such good news. It's out this week (Aug 13).