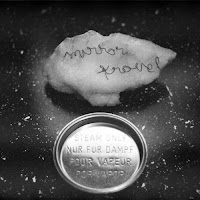 Mirror Travel is Tiffanie Lanmon (drums),  Paul Brinkley (bass and vocals) and Lauren Green (guitar and vocals) - an Austin, TX based trio formerly known as Follow That Bird. In that incarnation, they were considered one of Austin's most promising bands and supported both Bill Callahan and ...And You Will Know Us By The Trail of Dead on separate tours.

Due to issues with labels, finances, etc. (a by-now familiar story for hardworking young bands that tends to separate the strong from the weak), they regrouped, went into the desert of West Texas to record, and with a new band name - Mirror Travel - they have a full-length, Mexico, prepared to release in October. Here's the initial, eponymous track:

This is a terrific rock song with good guitars and a strong rhythm section throughout.  I love the insistent, semi-ragged guitar line at the beginning and over the outro, and the reverb-laced vocals, especially. It's introspective music, likely inspired at least in part by the location - south of the Davis Mountains and north of the US-Mexico border and traversed by wind that seems to come from a million miles away. Looking forward to hearing more of the album.