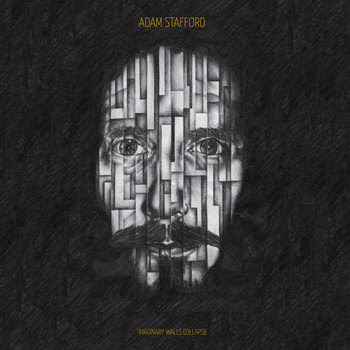 I am fairly certain that Adam Stafford has only one head, which is surprising only because of the number of hats he wears.  Outside of recording his own music, he is a filmmaker and heads a label (Wiseblood Industries).  As a recording artist, he displays a range of excellence encompassing post-punk, experimental, and soul pop styles.  He creates interesting, layered rhythmic and melodic patterns with loop technology, reverb and beatboxing, while adjusting his vocal delivery to match the material.  But I think that the key element that makes Stafford's music compelling is his ability to craft and deliver songs of melancholy, sadness and other tricky aspects of life in a thoroughly entertaining fashion.  And in what I believe is his finest work to date, it is on display via his new album, Imaginary Walls Collapse.  Perhaps the more convincing than my words, would be a listen to the album's second track, "Vanishing Tanks".

Interestingly, Stafford was reputed to be prepared to quit music recently, but was persuaded to continue with this album.  I find that background relevant because it makes the bold result even more surprising.  This is an artist who seems fully willing to be judged on his art, with nothing held back in the cupboard.  I'm thinking he gets an A.  Are you still on the fence?  Perhaps you'll like the moody southern soul of "Please".  To me, this track sounds like what you would have heard in a Memphis club in the '60s after the doors had been locked, most of the lights turned out, and the band wound down the evening with a gentle song.  Try it out tonight with a good beverage and the lights out and you'll see what I mean.

In the adept combinations of Americana, folk, electronic pop and post punk, there is an energizing sense of playfulness.  You can almost feel the sparkle in the eighth track, "The Sound of Fear Evaporating" and "His Acres".


Imaginary Walls Collapse is out now via Song, by Toad Records and Kingfisher Bluez.  It is climbing the charts in my household, I recommend it for yours.