SOUNDTRACK: CBGB, due out in October 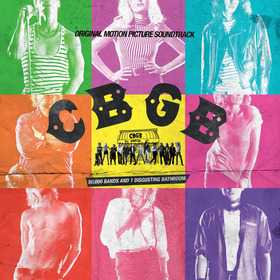 Almost as if we planned it to send JD's "year of Nuggets" out with a bang, comes the release of CBGB the motion picture, and CBGB the soundtrack. Combining punk precursors like The Velvet Underground, The Stooges and MC5 with bands that were part of the CBGB scene, Omnivore Recordings will release CBGB: Original Motion Soundtrack on October 8 with deluxe digital version coming the same day from Rhino.

Hilly Kristal dreamed of running a country and blues bar in the Bowery. Instead, the club he opened, CBGB (Country, Bluegrass, Blues) became the birthplace of punk and underground music. CBGB was the modern-day salon for the disenfranchised youth of New York City and Kristal offered these young local bands a stage.

The album contains a performance by Kristal (“Birds and the Bees”) and a new version of “Sunday Girl” by Blondie.

You probably know most of these tracks, but some are a little bit "deeper" in the canon than others, which is cool. And it will be nice to have a lot of this stuff together. Here's a live performance of "Careful" by Television:

Look for more news, perhaps a track or two, and for now you can pre-order at the Omnivore Recordings website.