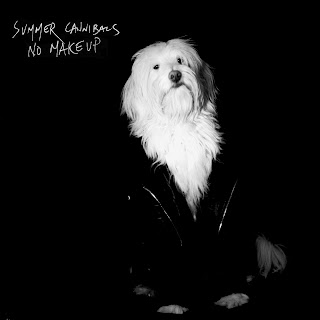 Summer Cannibals is a Portland-based rock band with dual lead guitars from Jessica Boudreaux and Marc Swart, and Boudreaux's vocals. This band grew out of their collaboration as members of Your Canvas. But whereas that band had a kind of indie pop, keyboard-based approach, Summer Cannibals is all rock - a simple, savage, honestly refreshing approach that will call to mind some of your favorite female-fronted guitar rock bands. There are 10 songs on their debut album No Makeup, but the thing is done in less than 30:00. Like I said, all rock, no frills and no sticking around after the point is made.

Here's "Wear Me Out" - with a measured intro that explodes about 45 seconds in, tough guitar lines and lyrically a simple, sort of charming proposal that says a lot in just a few words ("Let's pretend I'm your favorite dress/You wear me everyday and ignore everything else" and "Don't wear me down, wear me out"):

And here's "Take Me Out" - this one starts out with a good, bouncy, sort of punkish bass line, some excellent jagged guitar riffs and then Boudreaux's fetching vocal. It puts me in the mind of The Breeders:

Summer Cannibals produced all the songs on No Makeup on their own, created the album's artwork, and is releasing it on the band's own label New Moss Records. It's out this week (Aug 6). Read more, listen or just go ahead and buy (download, vinyl or cassette) at the links below.