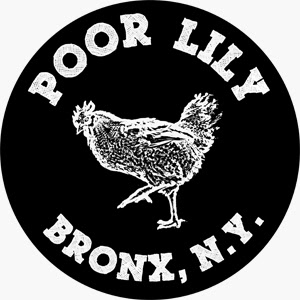 I've been on a long hiatus from this locale -- in fact, much longer than I'd intended. There's some stuff I've been listening to that I really want to write about, and a few weeks ago I was working through them in my brain, trying to think of whatever pointless crap I could to seem clever -- you know, same ol' same ol'. And then everything got sidetracked when I got this album. I've been trying to write a review of this record for at least the past three weeks. I can't write something about the other stuff I've been listening to -- I need to write about this. Because Vuxola is as good a hardcore punk rock album as we've seen in the recent past.

Poor Lily is a trio from somewhere -- I don't know, I've looked and looked -- but I think probably from Long Beach, because they've soaked up the whole SST thing like they grew up in Spot's garage. They're loud, snotty and brash, blowing through 19 songs in about a half hour just like they're supposed to. Singer Adam Wisnieski has the presence and delivery of the great punk frontmen. In the lower registers he channels (but doesn't mimic) D. Boon. At times he has a Biafran tremolo. When he's at full volume, though, which is most of the time, he's got a malevolent exuberance that's all his own. Even when he's yelling noises instead of words, it's a beautiful thing.  Check out "Railroad Spike"--

As you can tell if you listened above, these songs are anything but facile three chord Ramones knock-offs. About 2 minutes into the record (which is about 20 seconds into the second track), Wisnieski does eight measures of a bass riff that's (to me at least) a loving homage to Mike Watt. It's the sort of thing that, with seventeen and a half songs to go, makes a person smile and think "these guys know what they're doing, and this will not be a waste of time." It gives you the sort of confidence you get when the pilot comes on the intercom after takeoff and doesn't sound loaded.

Drummer Dom Biaocco and guitarist Max Capshaw are terrific at creating a perfect blend of the musical and the caustic, again, eschewing the easy stuff and going for more demanding, interesting fare. You can hear it on the fantastic "Justice Kennedy Has a Cold", which, as far as I can tell, is the first song about a Supreme Court Justice since Fugazi's "Dear Justice Letter" from Steady Diet of Nothing. That's 22 freaking years!

And have you got 40 seconds to spare? I put this song in this review because of my sophomoric love of songs with cussing in them. It's even better when they're great songs, like this.

Vuxola is one of those rare records where hearing the obvious influences doesn't detract in the least from the overall originality of the sound. It was released by the band on August 13, and you can listen to the entire thing at the Poor Lily website. Better yet, you can buy the damn thing (CD or download) for five bucks! And you should, because this is a special album and you're just going to waste that money on something stupid otherwise. I don't mean to sound like your mom but face it, you always do. You can buy their ep and their first album there as well.

What the hell, here's one more.