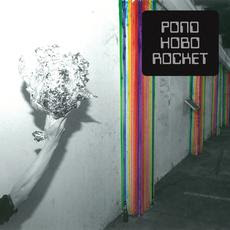 On their fifth album, Hobo Rocket, Pond is playing heavy, psychedelic stoner rock and coming down unapologetically on the side of "heavy". They combine the meandering experimentalism of early Pink Floyd with rhythms and guitars reminiscent of much heavier guitar bands like Led Zeppelin, and they sometimes do it in one song (lead track "Whatever Happened to the Million Head Collide?"). Then again, they're just as likely to break out into a heavy-booted glamfest like "Xanman", which seems to pay a bit of a tribute to T Rex, when it's not soaring off on wild guitar tangents.

It's an intense journey, for such a short album (34 minutes total). You'll follow Pond from the spoken word of the title track with Perth character Cowboy John on vocals (reminiscent of the heaviest Small Faces album Ogden's Nut Gone Flake, if Stan Unwin had been permitted to sing!), to the gentle psych of "O Dharma", which leads directly into the metallic stomp of "Aloneaflameaflower." My favorite track on here is "Giant Tortoise", which combines the album's trademark heavy stomp with equally heavy guitars, but takes several breaks to meander into psychedelic territory, and contains the strongest riffing on the album.

Hobo Rocket concludes with its longest cut, "Midnight Mass (at the Market Street Payphone)", a song that contains some of the prettiest guitar work on the record. It's a fitting closer, one that shows all sides of this talented, assured heavy rock band. The band consists of former Tame Impala bassist Nick Allbrook, Jay Watson, Cam Avery, Joseph Ryan and Jamie Terry. Allbrook describes some of their motivation: "It was the kind of mindset of finding our own little place in music, and being more of a functioning band, which is what makes it noisier and denser. This one we went as brutally hard as we would at a show. We wanted the songs to sound loose and live." If they got a little extreme (and they happily did), it may be a reaction to having been perceived as a "Tame Impala side project". Like a lot of productive band splits, this one has yielded two sources of terrific guitar rock. Hobo Rocket is out now on Modular Recordings (released Aug 6) and you can get a free download of "Giant Tortoise" at their website, or look up tour dates, or buy the record, at the sites below.