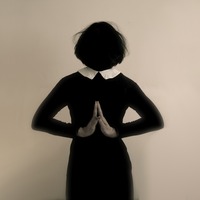 Atom Eye is a project of British artist Elsie Martins, and on her new album, The Otolith Sessions, she is creating a distinctive music built around field recordings with her work on guitar and manipulated tape loops. She's got collaborators on this record: it was mixed and co-produced by James Aparicio (Liars, Spiritualized) and features guest appearances from percussionist Pete Lockett (Björk, David Holmes, Royal Philharmonic Orchestra, Lee Scratch Perry, Primal Scream) and renowned artist and soundtrack composer Simon Fisher Turner whose work includes soundtracks for Derek Jarman's Caravaggio, The Last of England, The Garden and Nadja, as well as a solo career and some time in The The. It's an impressive group she's assembled.

Like a lot of ambient music, it unfolds slowly but unlike a lot of it, this stuff builds to a crescendo in places. It's fairly fascinating. Here's a short trailer as a taste of the record:


The record will be out in November on Forwind Records. There will also be a limited edition cd with "an exquisitely presented book featuring beautiful images and texts eluding to the recording materials, machinery and processes... [which] also encompasses an audio cookbook with recipes for you to create your own magnetic tape experiments."