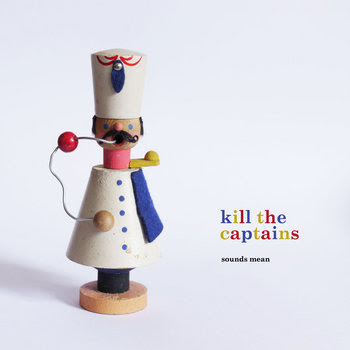 Kill the Captains aren't pulling punches with Sounds Mean.  On offer are eight tracks of experimental, genre-bending rock and roll.  One track will deliver pop rock, another post punk or psychedelic rock, yet another experimental pop.  But it is energetic, fun, and eminently danceable.  The production is well-balanced among the instruments and vocals, which gives the album a fittingly big, bold sound.  The songs run a bit longer than the average pop record and, along with some style changes mid-track, there is a bit of a jam feel to the proceedings.  But the pace and performance ensure that the songs never have worn out their welcome before the close.

Given the scope of the material, it is difficult to provide representative tracks, so I have elected to give you a few of the different styles.  I encourage you to stream the entire album at the Bandcamp link below.  In the meantime, here is the pop opening track --

The first single is "Disco Nazi", which features a wonderful bassline, electronic blasts and distorted vocals --

"Safety Words" is an angular post-punk track with solid pop credentials, and is my current favorite on the album --


Kill the Captains are Leon Carter, Bic Booth, Giles Robinson, and Paul Collins, and they are from Sheffield.  Sounds Mean is out now on Glasgow's fine Armellodie Records.