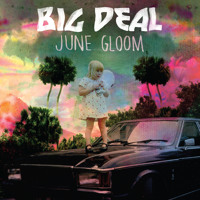 Two names that invite judgement -- Big Deal is the name of the band, and June Gloom is the name of the album.  In my view, the first name is pretty accurate, and the second?  Just a joke, because there is nothing gloomy about this record.

Big Deal is a London-based duo consisting of Californian Kacey Underwood and Brit Alice Costelloe.  Their first album was a more stripped down affair.  But for June Gloom they add a bass and drums to the electric and acoustic guitars, and adorn their songs with aggressive alt rock riffs and power pop driven melodies.  And the songwriting here is very good.  Big Deal isn't content to throw out a few riffs and fuzz their way through a melody with sweet male/female vocals.  The songs are dynamic and memorable, and any number of them could be in rotation on the radio, if anyone listened to indie rock on the radio.  Take a test drive in your car, I mean, a test drive of the sweet sound of "In Your Car" --

On formerly released single "Teradactol" the band proves adept on the shoegaze end of the spectrum.  But Underwood and Costelloe put their personal stamp on the genre with a song structure and vocal track that is more indie pop, resulting in a song that simply has more personality than the usual shoegaze fare.

June Gloom is out now on Mute.  While it hasn't been ignored, it also hasn't attracted a lot of attention.  I suspect that part of the problem is that some music writers don't like pumping up indie pop with sweet male/female vocals (unless it contains Cults levels of darkness).  I don't share that aversion.  I like variety and I'm not the least bit shy to say that I like pop music.  June Gloom is an album that will make you feel good about music, and that is a very good thing.