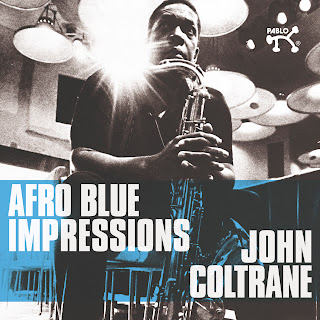 There's nothing like a John Coltrane record. As much as I enjoy Parker, Miles, Evans, Rollins and others, at some point when I want to listen to jazz, it comes back to Coltrane. A lot of the reason is the music he made with the quartet on this wonderful reissue of Afro-Blue Impressions: Coltrane, McCoy Tyner, Elvin Jones and Jimmy Garrison. But apparently they were even better, even more transcendent, live. On these recordings, you hear the greatness the band achieved in the studio on cuts like "Naima" and "My Favorite Things", but you hear something more - I think it is the spirit of discovery, the restlessness when a band this good has truly mastered its art and is looking for new territory to explore. According to the producer of this reissue, Nick Phillips: “When you compare and contrast the performance of a composition that was released on the original album to a different performance of the same composition from among the bonus tracks, it perfectly illustrates just how restlessly creative Coltrane and his band were. Each song was a springboard for unpredictable improvisation and boundless creativity.”

This quartet, like a lot of my favorite rock bands, played together perfectly - knowing when to "lay out" or take a back seat, and though they were clearly creating music according to their own muse, somehow they had an almost perfect sense of how to keep their audience fully engaged - how hard, how far and how long to push solos.

From the Pablo presser announcing this release: Afro Blue Impressions represents an anniversary within an anniversary. By the time Norman Granz launched Pablo in 1973, he’d already stockpiled several years worth of previously-recorded tour performances in his vaults, including these sets from Stockholm and Berlin in late 1963 (October and November, respectively). This new two-disc reissue of the classic Coltrane Pablo album — originally released as a double LP in 1977 — arrives just a few weeks ahead of the 50th anniversary of the original concerts. In addition to the nine tracks that appeared in the original Afro Blue Impressions double album, the reissue also includes three bonus tracks from the Stockholm date: “Naima,” “I Want To Talk About You,” and “My Favorite Things.”

“These tracks brim with the wonder and the power of discovery,” says Neil Tesser, author of the new liner notes accompanying the reissue. “At this juncture, the Coltrane Quartet existed in a state analogous to quantum mechanics . . . Each new performance yielded new insights. As the musicians gathered this data and sifted through it, they would arrive at the polished theories underlying the eventual masterworks to come, such as the album Crescent and the monumental suite A Love Supreme — achievements that would then launch a new age of chaotic discovery, on such albums as Om, Sun Ship, and Meditations. How much those recordings will resonate on their 50th anniversaries will likely engender some controversy; Coltrane didn't live long enough to complete the journey that began with them, and the jury remains out, even decades later, regarding the impact of that work. But history long ago weighed the import of his work in 1963, when his music stretched and struggled its way toward becoming Coltrane’s iconic stylistic statement.”