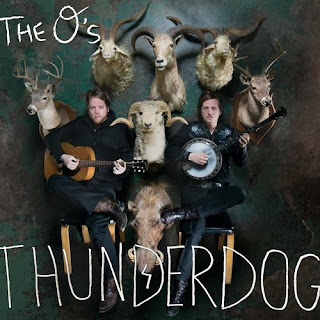 The O's are a Dallas, TX-based band playing an upbeat, fairly catchy style of folk music. I might put it somewhere along the Americana continuum between "cowpunk" and bluegrass, with plenty of pop hooks thrown in for good measure. The band is a duo: Taylor Young (acoustic guitar, kick drum) and John Pedigo (banjo) that formed in 2008 - both of them have spent time in other Dallas bands, including the Polyphonic Spree.

Their new album is Thunderdog, and they're heading out across Texas and across the Southwest in support. They've made a free download of "Outlaw" available at this link. The album is apparently named after Young's 36-inch kick drum  - "We would always say that thing could 'Thunderdog' any crowd we played in front of," Pedigo says. "Thunderdogging is a blazing of our own trail," comments Pedigo.  "So, the deal behind naming our album that is creating our own path with the record, and with the new record label.  There aren't any rules.  We're just thunder-dogging our own way through it all."

Here's a live video of them playing "Outlaw":

They draw comparisons to the Avett Brothers, but I like the O's vocals a little better than the Avetts. I find the music charming, and this record very refreshing and entertaining - just honest, heartfelt, raucous, creative music from a couple of guys who clearly take a lot of pride in their work... with good reason.