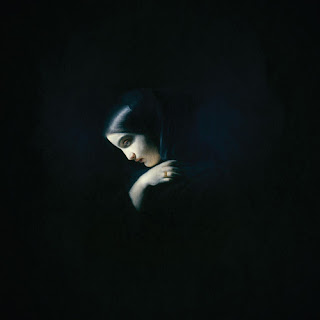 True Widow is a Texas band playing a heavy, heavy take on the shoegaze/noise pop genre. On Circumambulation, they feature a thunderous bottom end, alternating male/female vocals, and some guitar tones that are, frankly, reminiscent of Nirvana. It's a very interesting sound, and it certainly provides a workout for the bass portion of your speakers.

The band consists of guitarist/vocalist Dan Phillips, bassist/vocalist Nicole Estill and drummer Slim, TX. Their producer is none other than WYMA hero Matt Pence (Centro-matic's drummer and co-owner of Echo Lab in Argyle, TX) and they credit him with helping them get the thick, heavy sound they are looking for. Phillips' vocals are a bit understated, whereas Estill's seem to be a little bit more out-front. It's a pleasant contrast and provides a sense of balance to an album that consists of eight rather lengthy songs.

For a little more background, go check out this good Dallas Observer interview with the band about their process, their dedication to this signature heavy sound, and even the reason their song titles look like that.

And here's my favorite track - one that features the full array of their formidable sound, including a terrific Estill vocal - "Four Teeth":

This is a tremendous album, one of my favorites of 2013 so far. It's out now on Relapse (released July 23), which is responsible for another of my 2013 favorites, ASG's Blood Drive. You can listen to more at the Bandcamp link - click through the "Four Teeth" stream above. Or you can visit their website or Facebook.