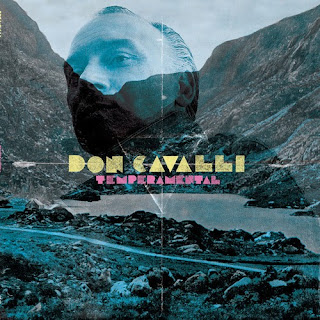 Don Cavalli is a French artist playing a combination of invigorating rock sounds on his second album, Temperamental. From psychedelic guitar rock to rockabilly to blues-rock to boogie, he travels far and wide in his quest to deliver an original sound. On the title track, I'm reminded of the spirit of joy that was present in Howlin' Wolf's best songs -- not to say he necessarily sounds like the Wolf, but there's something about his singing on this one that reminds me of the late great Chester Burnett.

This album is a most welcome combination of influences, tempos, styles and instrumental approaches - as unexpected as it is enjoyable. There's blues-influenced stuff like the title track, electro rock like “Santa Rita”, a bouncy R&B-influenced track like “Me and My Baby”, and some combinations that sound downright strange to my American ears: the rap and sitar combination featured in “Feel Not Welcome” and the banjo/Chinese rhythm of “The Greatest".

Most of the album is upbeat. Cavalli's clearly feeling pretty good, but he's not averse to delving into territory that sounds like it belongs in a Tarantino film on some of the stuff here: ‘Say Little Girl’ is a dialogue with Rosemary Standley, who warbles sweetly to offset Cavalli's guttural growl. The motorcycle tribute "Zundapp" must be heard to be believed - because why would you take my word for the fact that it is a combination of German motorik and American rockabilly?

I think this album is a fascinating trip into world music - both the influences rock and R&B have had throughout the world, and the influences that flow the other way. But on most of Temperamental, the sound rises above the level of mere influences or "soundalikes" to a level of bracing originality. I think Cavalli himself says it pretty well: “It sounds old, but not traditional. I do not follow; I just want to create my own thing.”

The album is out now (released Aug 13) on Everloving Records.