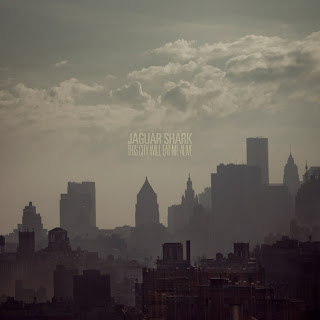 Jaguar Shark is playing a hard, fast but melodic brand of punk. It features guttural, raging vocals to challenge your musical complacency, and dual guitars to challenge your speakers. They've been making waves in the NYC/NJ punk circles, and it's easy to see why. If you like your music to rage and feature tons of energy, This City Will Eat Me Alive is just for you. At 13:00 with five new songs, it's fairly generous by EP standards, too.

The band consists of a terrific hardcore drummer named Steve Cerri, Jim Richardi and Greg Mitchels on guitars, and Reilly brothers Derek (vocals) and Alex (bass). Derek and Richardi founded the band, and it seems that all of them play in other bands - Derek is the drummer in hardcore band Ensign.

Here's my personal favorite track, "Banned From The Fest":

Reilly describes the genesis of the song: “It's about waking up one day and not really knowing how you have gotten, where you are and feeling really anxious, about it.  4202 is actually my apartment number. I moved there with my girlfriend and soon after we separated.  Since that happened a year and a half ago I have always felt a little strange there.”

This is some seriously strong music - if you like the old stuff like Fear, or some of the new stuff we've featured here recently like Muuy Bien out of Athens GA, this is well worth checking out. The album is out now (released July 16) and you can buy it for $4 at Bandcamp - check out more info, future tour plans, etc. at their website or Facebook.