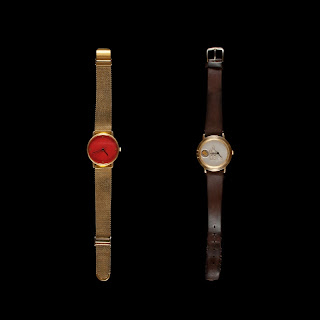 Golden Suits is Department of Eagles member Fred Nicolaus, a NYC-based singer-songwriter. On the self-titled debut Golden Suits, Nicolaus demonstrates a winning combination of literacy, thoughtfulness and warmth. In places, his style reminds me of the easy grace of Jack Johnson, though his voice is in a little bit higher register, and there's a good bit more variety in the instrumentation than on Johnson's work - including some nice, understated horns in places. Still, there's a sweetness to his sound that makes the connection for me.

We've previously featured two advance singles from the album - "Swimming in 99" and "Didn't I Warn You?"

Opener "Swimming In '99" is driven along by a simple, ticking beat, which serves to feature Nicolaus' warm vocals:

The album is the result of Nicolaus' eventful year, in which he went through a breakup, was displaced from his Brooklyn apartment by a rat infestation, traveled to Germany to learn about his grandfather's death in WWII, went broke, and lost forty pounds. He also cites his favorite writer John Cheever as an influence that affects every song on the record. The video above documents Nicolaus' attempt to buy every copy of a Cheever book in Manhattan in one day. As you might expect, there are a lot of books in Manhattan.

Here's "Didn't I Warn You" - a slow building, lush and beautiful pop song:

"You Can't Make Your Mind Up", like some of the other songs here, features a sort of metronomic beat in service of highlighting the vocals, lyrics and other instrumentation. There are also some ballads with simpler arrangements - again, featuring Nicolaus' vocals: "Restaurant Song" and "Little One", for example. The closing track is "Dearly Beloved", another song with a very full arrangement and female vocals in the chorus.