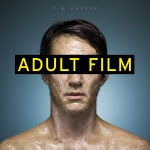 Tim Kasher has written and released 12 full-length albums both as a solo artist and with his bands Cursive and The Good Life, and his newest (and second solo) album, Adult Film, will be out Oct. 8.

For fans of Cursive, the album is a familiar blend of rock and pop, with some pretty big guitar sounds embellished by keys and horns. Kasher has assembled an impressive group of friends to help: Sara Bertuldo (bass, vocals), Patrick Newbery (organ, keys, synths, horns), and Dylan Ryan (drums) – who backed him while touring around Monogamy – as well as Nate Kinsella (drums; of Make Believe and Birthmark); Laura Stevenson (vocals; of Laura Stevenson and the Cans); Matt Focht (drums; of Head Of Femur); Jenna Morrison (vocals; of Conduits); Laura Carrozza (flute; of Aficionado); and Sarah Holtschlag (saw).

Here's a trailer for the album: