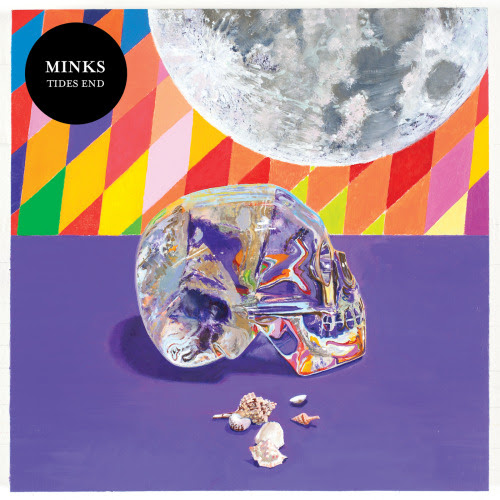 Minks debut LP for Captured Tracks, By the Hedge, attracted descriptions such as shoegaze, fuzz pop and goth pop.  For Tides End, the just released sophomore album, the sound has moved to a brighter, better defined synth/dream pop.  The song structures and the writing is tighter, with the production leaving the hooks at the forefront.  It is a sound that evokes summer, sunny days and starry nights about as well as any sound you've heard lately.  That may not be a vibe always matched by the often darker and more introspective lyrics penned by frontman Sonny Kilfoyle, but for most of us it is the sound rather than the lyrics that make the first, and most lasting impression.

If a Minks fan were inclined to demand another edition of By the Hedge, I suppose Tides End may not be a welcome development.  But I think that approach is unfair.  Ultimately, I think that how one feels about this album depends on how one feels about a new album of '80s-style new wave synth pop.  The writing, performances and production are very good.  And some of the songs hit the excellent standard.  Of course, you will make up your own mind, but for me this album is a welcome album for the final month of summer.  I'm listening to it now as I type it in front of the window with a blue sky and fluffy white clouds in the background, and I think it is the perfect soundtrack for that vision.

If you looked up "summer synth pop song" in the dictionary, it would be appropriate to find a stream pf "Everything's Fine" --

Here are the official video and stream for album track "Margot"--


Tides End is out now via Captured Tracks.