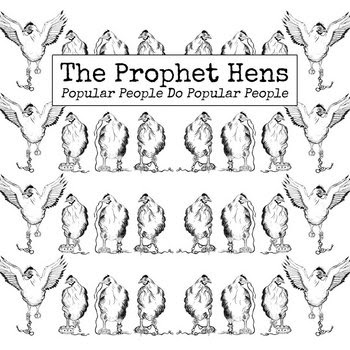 I suppose it would be understandable if one were to become distracted by the history that suffuses Popular People Do Popular People.  After all, the band is The Prophet Hens, a name taken from a 19th century hoax in which a woman claimed that her hens laid eggs bearing written prophecies of the end of the world (albeit in her own handwriting, I believe).  Moreover, the album conjures the ghosts of the Dunedin bands that go before them in producing the dark, jangly and wholly compelling guitar pop (too) generally referred to as "the Dunedin sound".  But it would be a shame to tarry too long on the background.  Because while the sound of The Prophet Hens undeniably brings to mind iconic bands such as The Chills and The Bats,  the triumph here -- and make no mistake -- this album is a triumph, is that these songs comprise a vibrant opening statement of a band that deserves attention in their own right.

The combination of upbeat, jangling melodies and melancholy themes is a characteristic of this brand of guitar pop, although chief songwriter Karl Bray varies the atmosphere and doesn't let himself get stuck in the ditch repeating a message.  Relaxed grooves such as "Pretty" are offset by the urgent songs such as "Easy as the Sun".  We even are treated to a song about the quality of the back yard lawn ("Green Grass").  But for me what moves The Prophet Hens towards the front of the class is uniformly solid songwriting and the combination of the vocalists, Bray and Penelope Esplin.

You can stream the entire album at the Bandcamp link, but I will highlight a few songs.  The album begins with "High Times", combining a jaunty arrangement with the story of a break up.

The third song and first single is "Pretty", which Bray wrote several years ago about his then girlfriend.  Fortunately for us, the song turned out much better than the relationship.  By the way, the official video for "Pretty" was completed only three days ago, and it is well worth watching.  It was filmed on the Otago Peninsula near the band's home of Dunedin, and is the work of some friends of The Prophet Hens.

My current favorite song on the album is "All Over The World", which atypically features Esplin on lead vocals.  The song simply is one of those perfect slices of jangle pop that will always be a draw for many of us.


Popular People Do Popular People is released by Dunedin's Fishrider Records.  It is available on CD and digital download (vinyl may be available later).  While the official release date is the end of the week, it can be purchased now via Bandcamp.  And our US readers should note that the exchange rate means that the nine-song LP is yours for around $5.50.  That, my friends, is a steal.