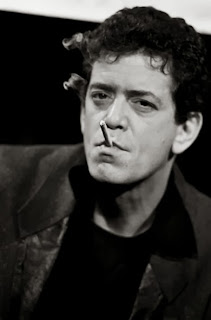 A great deal will be written about Lou Reed in the coming days and you should read some of it. Lou Reed was a unique character who led a fascinating life. There will be many fine stories to tell.

I figured Lou Reed was too tough to die. I figured when death knocked on his door, he'd push death down the stairs, throw him out, and give him a piece of his mind. Death would go away only to return in a half hour, enamored with the charismatic rascal Lou Reed, and the two would then have a glass of wine together, the death merchant agreeing to spot Lou another 20 years.

The Long Island-raised Reed was always my ideal New York City persona - the quintessential street smart, hard yet sympathetic iconoclast who did everything on his own terms. He was the original bad ass rock star.  But also a guy who set out to write the great American novel through a 4 minute rock'n'roll song.  Andy Warhol, David Bowie, Iggy Pop, Allen Ginsberg and every other cool person flocked to Lou Reed. The word "artist" can sometimes be thrown about a bit too liberally with rock musicians, but Reed was one of the great American artists of the past 50 years. His work already has and will stand the test of time.

His work with his seminal band The Velvet Underground in the late 1960's-early 1970's was commercially ignored at the time but saved rock'n'roll from its bloated self and worst tendencies, influencing generations of bands to follow. It's not an exaggeration to say that without Lou Reed, there would be no Ramones, Elvis Costello, Talking Heads, Pixies, Nirvana, Pearl Jam, R.E.M.  and the list goes on.

And Lou Reed understood that in rock'n'roll, simple is good, and the best rock'n'roll also doesn't stray too far from its rhythm and blues roots. Here's one of my favorites:


As great as the VU stuff and his early heralded 1970's solo work, I am particularly partial to 3 records he made in the 1980's - New Sensations, Mistrial and New York. Tough, smart, great players, taut writing, Reed was firing on all cylinders. Here's the Lou Reed of that era performing "Dirty Blvd" from New York on TV in 1989:

Lou Reed gave his life to rock'n'roll. And a countless number of musicians joined bands because Lou Reed inspired them.  We lost an original today, one of the all time greats.  Here's his ode, his anthem to his art, his beloved rock'n'roll, certainly one of the most iconic and very best songs of the rock era:

His music endures, but his influence continues decades later. Recently formed bands in Helsinki, Glasgow, London, Auckland, Sydney, Melbourne, Singapore and elsewhere cite Lou Reed as an influence. The dark, urgent, urban pop of the Velvet Underground is one of the essential sounds of rock and roll.

Just saw a great quote from Lou: "One chord is fine. Two chords is pushing it. Three chords, you're into jazz."

Hey, isn't that the guy who did the album with Metallica?

I'm kidding. "Magic and Loss" is one of the most powerful and touching albums I've ever heard. It's always weird to admit Reed's music was emotional and touching because he seemed to have that cold detachment in his approach. But man, when he was really on his game, there's really no one whom he couldn't blow out of the room...

Katy, great insight. Comment here anytime. Thanks for stopping by.