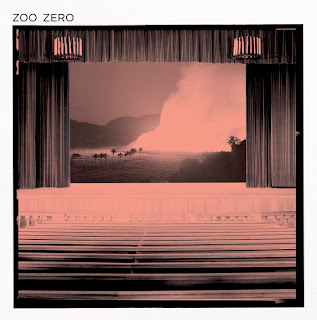 Zoo Zero is a London-based guitar rock band with an intriguing set of influences – they claim the guitar noise rock of Sonic Youth and Mission Of Burma as well as the psychedelic pop of Julian Cope, Robyn Hitchcock and XTC, among others. I'd throw in a dose of motorik a la Kraftwerk and the like, although perhaps that's implied in some of the artists mentioned above. I know Kraftwerk's influence runs deep in European post-punk guitar rock.

Here's the opening track, "Fraktion", where I find the motorik influence particularly strong:

However, it's not just a band that creates locked-groove instrumentals. In the words of guitarist/vocalist Tom Pinnock, "I guess we’re interested in music where noise and weirdness clashes with melody. It’s way too easy to make some avant-garde, instrumental record – it’s harder to combine the unexpected with actual songs.”

Here's "Show Me Your Flag" - a great combination of an upbeat, yet slightly disaffected pop vocal with some experimental, sort of sideways rhythms and a galloping drumbeat:

There's also a bit of psychedelic, Middle Eastern-sounding guitar on "Double Cross" - at 5:41 one of the tracks on which they stretch out and slow things down a bit, with an repeated guitar riff and an understated vocal echo behind a slow guitar build-up that gets fairly heavy with feedback over the last 1:30. "Stationed" is all punk energy at the beginning, with a cascading guitar run to close it out. There's a good variety of tempos and even song styles here, which is one of the things that kept me coming back to this record. Pinnock's vocals are a bit reminiscent of Tame Impala's Kevin Parker - and based on the strength of this album, I'd put Zoo Zero with Tame Impala and Pond in a small group of psychedelic-leaning guitar rock bands whose future output I'm greatly anticipating.

The album is available through Crest Cont. Records now (released Sept. 30) as a download or on white vinyl.