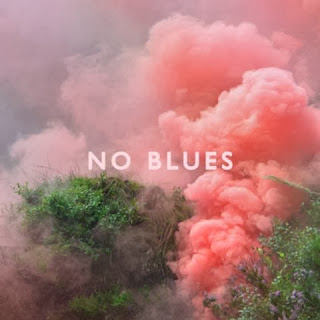 Los Campesinos!, the Welsh wall-of-sound rockers, have released their fifth album No Blues. It's a wild ride, featuring big, big guitar sounds, lead singer Gareth's strong, nearly shouted vocals and an impressive bag of sonic tricks. It's got a kitchen-sink approach that includes a charming childrens' chorus (a local cheer squad joined them in studio) on "Avocado, Baby". As with so many songs here, the title comes out of a clever turn - "A heart of stone / A rind so tough it's crazy / That's why they call me the avocado, baby":

Gareth writes the lyrics, and claims that his lack of musical training and ability lead him to overcompensate with cleverness. He's right in part, it's definitely clever... but I'm not sure he can properly be accused of overdoing it. Nor can the instrumentalists, even though they create a tremendous ruckus. It's just that these guys (and girl) have so much to say, and seem to feel such a strong desire to share it, that anything goes.

Here's "What Death Leaves Behind" - super-upbeat, and while singing about the nominal topic of death (including Gareth's turn as a sexton), they make quite an agreeable racket and get to an optimistic place:

It would be easy to connect them with predecessors such as U2 and Bruce Springsteen, and they definitely truck in the anthemic stuff and sing about how a particularly poignant moment (a breakup, an emotional turning point) can seem to be never-ending. But like any successful band, they bring their own slant to the music - earnestness and enthusiasm being the top two. On this album, the enthusiasm takes the front seat and it's our pleasure (as well as those Welsh kids') to get to sing right along.