Lee Bains III And The Glory Fires - Can a Rock Band Be TOO LOUD? 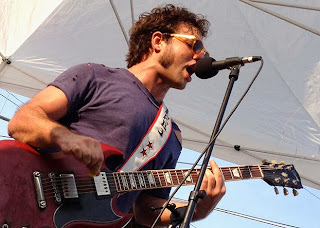 "Too Loud For Texas?" No, that's not a song, it's a judgment rendered by the sound engineer and management of a venue called "Live Oak" in Ft. Worth, TX. Earlier this week, Southern rock and soul shouters supreme Lee Bains III And The Glory Fires played a show at this place and got into a bit of a tussle with management. The Facebooks and the Twitters are lighting up with back-and-forth, he-said-she-said, and I'm not here to place blame or render judgment on one party or the other. I am, however, here to observe that having your travelling rock and roll band declared "TOO LOUD" is the kind of publicity money can't buy.

Our interaction with Bains has been mostly one-sided. All of us at WYMA love the music of this Alabama band, and it has showed over the last couple of years. Back in early 2012, we got a preview of their album There Is A Bomb In Gilead via the Alive/Naturalsound comp, Where Is Parker Griggs? - and immediately fell in love with it. Here is the introductory piece I put up then: New Rock/Soul Discovery: Lee Bains III And The Glory Fires. You will note the use of adjectives like "screaming". Again, this is not a coincidence or accident. The music is best heard loud, and it's made to be played loud. I say, mostly one-sided. Lee did send a short note of thanks, which to me is usually the mark of a well-raised dude.

At the end of 2012, we heaped on the praise once again. Here is JD's list -- note his mention of their "fantastic bar band vibe". Here is mine -- quoting myself (I can do that, it's my blog): "Out of Alabama comes a dynamo, a hard-rocking force of nature who manages to combine punk, country and R&B to great effect. The Dexateens were really good, but Bains has upped the ante here – he’s a great shouter who can switch gears and sing straight-up soul music, backed by a great southern rock band." And finally, JD was inspired to post about their live show in Portland recently. Again, "tore through... with abandon" is mentioned in a positive light.

However, at the Live Oak in Ft. Worth, there is apparently also a "restaurant section" and Bains' band managed to clear that sucker out, which launched the series of events described in this online article from AL.com (they're rightfully proud of the ruckus their boys raised deep in the heart of Texas). You can certainly read more about it, including various points of view, at the Facebooks and Twitters of the band and the venue. There are some entertaining comments, for sure.

Here are a few videos of the guys in action:

(Given my choice between seeing a band at "Live Oak" or "Bluesklubb", I think the choice is somewhat clear)

In the end, all I guess I'm saying is: if you want loud, you get it with Lee Bains III & The Glory Fires. They are the very essence of truth in advertising. No pretense, no artifice, just good, honest, LOUD rock and roll. If you want a chance to see a band that is too loud for Texas, and you live in the Southeastern US, you are in luck. Don't sleep on this:

Or if you live in another part of the country and want to hear them, you can get the record from Alive/Naturalsound. Just make sure you don't put a bunch of foam or curtains around your speakers. You deserve to hear these guys in their natural state. L-O-U-D.

The funny thing here in Portland they played a club that is always fairly loud. And while the Glory Fires were loud, appropriately loud, they weren't any louder than any other rock and roll band.
Then earlier this week I took my 13 yr old daughter and her 8th grade friends to see a dance pop band the kids love - Walk the Moon. They were REALLY loud!
Those guys at the Live Oak sound like world class dipshits. But I love Lee Bains III and the Glory Fires getting all this well deserved attention.
They aren't the loudest band in America, but they are one of the best. And I did visit with them in Portland and you couldn't meet a nicer bunch of Southern gentlemen.