Rerelease: Sandra Phillips - Too Many People in One Bed (produced by Swamp Dogg)

Today's treat is another rarity rescued from the vaults of producer/writer/performer extraordinaire Jerry Williams - aka Swamp Dogg. 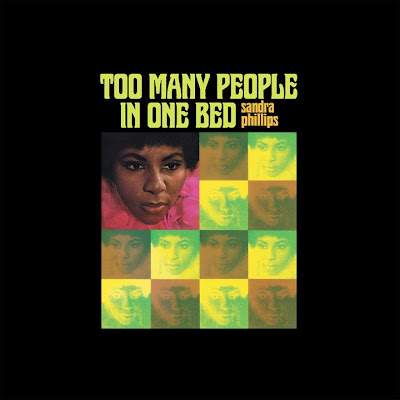 Sandra Reaves-Phillips was southern soul diva Sandra Phillips before she became a Broadway/movie/TV regular. Her career includes a credit in the critically acclaimed 1986 film 'Round Midnight. She was a recipient of a Woodie Award for her work on Broadway in the revival of "Raisin in the Sun." Reaves-Phillips has also been a frequent guest singer and performer on “Garrison Keillor’s Prairie Home Companion” and has performed alongside the legendary Ray Charles.

In 1970, Sandra Phillips was rescued from the chitlin circuit, signed to a contract, and had a album produced by Jerry Williams - AKA Swamp Dogg. Swamp Dogg remembers: "I signed Sandra Phillips to Wally Roker’s Canyon label and then took her to Macon, Georgia, where I had a magic lantern that produced a band consisting of Johnny Sandlin (drums), Robert Popwell (bass), Pete Carr (guitar), Paul Hornsby (organ & piano) and me, also on piano. My genie wouldn’t let me do wrong. I had a production deal with Wally for as many albums as I wanted to do, with complete autonomy. I’m damn sorry he went belly-up. The album that you are drooling over was never officially released. Canyon shipped it and then Canyon bought the farm. I gave Sandra an unconditional release and we have remained friends."

Re-release is a misnomer. The album Too Many People in One Bed is finally being released by Alive/Naturalsound Records. While missing much of the Dogg's convoluted sense of the absurd, it exhibits his masterful production skills combined with a great backing band and the impeccably arranged Swamp Dogg horns. Swamp Dogg is a peer to the finest producers at Stax. This band does not miss a beat in comparison with the Memphis Horns and Booker T and the MG's.

The core band went on to become consummate session players. Pete Carr contributed to songs like Bob Seger’s “Main Street,” Rod Stewart’s “Tonight’s the Night,” Paul Simon’s “Kodachrome,” and Luther Ingram’s “(If Loving You Is Wrong) I Don’t Want to Be Right,” among many others, and worked on countless other hits as an engineer and producer.  The others can be heard on recordings by B.B. King, Levon Helm, Wet Willie, Bob Seger, Duane Allman,  Charlie Daniels, Chuckie Leavell, the Allman Brothers, Boz Scaggs and Elvin Bishop.

Too Many People in One Bed has been recognized as a classic by Britain's "Northern Soul" movement. You can finally treat yourself to this long lost exemplar of southern/country soul. Order it as vinyl or cd at the Bomp! store here.