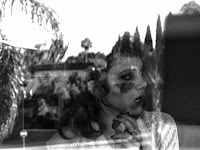 Out of the insanely creative Foxygen collective comes another artist - Elizabeth le Fey, aka Globelamp. That's her in the video they made for "San Francisco" from We Are The 21st Century Ambassadors of Peace and Magic. She's released one album, 2011's self-titled debut, and is working on a new one with Sam France. Like her former band, le Fey's music is lo-fi, faintly psychedelic, easygoing and features plenty of reverb. She's got a clear, pretty voice. Here's a track she released in July, "Controversial/Confrontational":

Here's the video for "Gypsies Lost":

The first album is available for "name your price" from Bandcamp, and you can buy the new single for a buck. Do it. Looking forward to hearing more from her... and credit to reader Rita for bringing this to my attention.