Have a little time for Casual Sex? 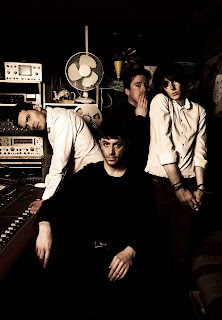 I introduced our uninitiated readers to Casual Sex several times earlier this year (here, here, and here).  The Glasgow band, now a foursome, consists of Sam Smith (vocals/guitar), Edward Wood (guitar), Peter Masson (bass), and Chris McCrory (drums).  They arrived in the US last week to perform at the CMJ Music Marathon, and are playing dates with Franz Ferdinand.  Their final US show is in New York tomorrow night.  Then they have two dates in Canada, and return to Europe.  The remaining tour dates are listed below after the interview and music clips.

I think that Casual Sex is an exciting band, primed to make a splash, and I wanted our readers to have a chance to learn a bit more about them.  I submitted a few questions to the band, and Chris McCrory consented to answer them.  The interview is immediately below.  After reading the interview, you can watch the video (and/or stream) a song from their upcoming EP which will be released by Glasgow's We Can Still Picnic label.

WYMA: How did the band begin?
CS:  Casual Sex began with Sam as a studio project at The Green Door Studio in Glasgow. Sam and Ed met years ago and I met him and Pete when I'd just finished recording an album there with my old band. He gave me a demo CD! I liked it, joined the band and that's how it began.

WYMA: Does everyone still have a job other than Casual Sex?
CS:  Ed has just quit his job and Sam and I both record bands for a living at The Green Door Studio, Glasgow and Shady Lane, Erskine respectively.

WYMA: Are the songs composed by one or more individuals, or as a group?


CS:  The songs come to us in several ways. I think it's important to keep things fresh and not stick to one set way of working. Some songs could be written and recorded within two hours at a rehearsal. Another could come from a single band member and we'll work it up into a full arrangement together. Casual Sex are a creative collective, it's very open and we like it that way!


WYMA: In the wake of several well-received singles, your first EP is being released.  Please tell us a bit about it.  For example, when, where and in what formats will it be released?   Does it contain the singles, new songs or both?


CS:  The EP has 5 new tracks and if you've seen us live then you might have already heard one or two!  We've also just put a video for one of the tracks, "Nothing On Earth" up on YouTube [WYMA: We have embedded the video below]. The EP is being released as a limited edition 12" on WCSP records on November 11th. You'll be able to buy that in good record shops in the UK or if you're elsewhere you can buy it direct from us from our big cartel store. It'll also be available on all the usual digital outlets.

WYMA: If one song on the new EP is going to make you famous, which one is it?


CS:  Hmm, I have no idea. The fickle world of fame has never really occurred to us when making music, so you can decide for yourself when you hear it!

WYMA: To my ears, your music has a distinctive sound.  But every band is going to sound a bit like one or more other bands.  If you were required (such as in an interview with a music blog) to name four other bands with which you think you should be grouped in terms of sound or style, which bands would you put on that list?


CS:  That's no fun! We'll leave that up to you to decipher!


CS:  We rate releases and touring on a scale we devised, The 'Roxy Music' Scale. I'm sure you can imagine the kind of glamorous points that feature on that scale, and I'm quite sure our aim is lofty. Whisky distilleries? There's an idea..! We were contemplating investment banking as a group while waiting in the rather long line at US Customs. However, we can confirm that an album is definitely on the way for 2014.

WYMA: I noticed that you intend to be back in 2014 for SxSW.  Congratulations!  Do you intend to add other dates and see more of the US?


CS:  Thank you, the USA is good. We're like giddy children here. And yes, we intend to add some more dates in exciting places around then. It's all secret right now though, otherwise it'd spoil the fun!

WYMA: Your label is Glasgow's We Can Still Picnic.  How did you choose them?


CS:  We never chose them, they chose us! Glasgow's very tight-knit, everybody knows each other and they're a good label who we share tastes with, so naturally we just gravitated towards each other.

WYMA: You undoubtedly have caused pain, heartache and embarrassment to the fans who entered the band name in a search engine on a work computer to find out more about you (at least, that is the story given to the boss).  Have you considered providing compensation, or at least a public apology?


CS:  Absolutely not! We like our name! I will say that I have seen couples questioning each other's 'taste' in the comments section of our Facebook page before however, and that was rather amusing. Though, everybody knows how to use Google now, right? Google Chrome has an incognito mode by the way if you really must cover your tracks!

WYMA: What are you listening to in the tour van, and who decides what you will listen to?


This tour is too young to have a band favourite as of yet! Ed had Barry White singing with Pavarotti playing when he was in the shower this morning, that was cool. We're generally easy going when it comes to what's playing. Though from experience, trying to force My Bloody Valentine on unappreciative band mates isn't a good idea.

WYMA: Since our focus is on new bands, or at least bands that are not yet well known, we have to do a bit of digging to find worthy artists for our pages.  To do that, we pay attention to music recommended by bands that we follow.  What up and coming bands would you recommend to us?


CS:  Me and Sam have just finished producing the new album by Asian Babes, they're from Carlisle in the UK and I think people should pay more attention to them. Fortunately, they're going to be on the next We Can Still Picnic compilation LP. Kill Surrrf are another grossly under appreciated band from Glasgow. I've just produced their new EP for a cassette label, Number4Door and it should be out in the next couple of months. They have a knack for lazy, lovelorn pop hooks (I think they should make an album of 'slow dances' for high school proms) and I'm rather excited to start working with them on their debut LP when I get home.

WYMA:  Thanks for the recommendations.  We covered Kill Surrrf in April (here), and will look forward to more from that band.  We'll check out Asian Babes, but that may require Incognito browsing.  What living bands or artists who are no longer recording or performing do you wish would begin playing music again?
CS:  I'd be interested to hear Brian Eno do something that isn't generative and/or ambient again. Although generally I think once bands are gone, they should stay gone and make way for something new. Think of all the interesting new music we could have coming to the fore if it wasn't saturated with reunion tours. Somebody should start a band with a defined and finite lifespan, who are contractually obliged to split up on a given date, never re-issue their records and never reform. That would be cool.

WYMA:  Thank you very much, Chris.  We appreciate our time with Casual Sex.