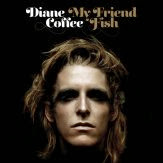 Diane Coffee is former Foxygen drummer Shaun Fleming, and he's made a very good psychedelic soul record. My Friend Fish is the product of a two-week sickness-driven apartment confinement immediately following Fleming's move to NYC from California. Fueled by homesickness, real sickness and nothing but guitar and drums as company -- like a fever dream or any other kind of altered state, the album's songs combine real-life stuff with flights of fantasy, most often not bothering to make clear distinctions. The lyrics make occasional reference to the circumstances:

Then the soup metaphor is stretched - due in part to its fitness for the task, perhaps as much as the closed universe in which he was operating - in the last track, “Green”:

Perhaps he's invented a new genre: Love songs by sick guys... There is a lot of sweetness to this album - there's a gentle swing to many of the choruses that wouldn't be out of place in '60's pop soul from Motown... but plenty of strangeness, too. “Tale Of a Dead Dog” brings to the party a bit of Pink Floyd influence, and along with the overwhelming doses of Beatles, Donovan, Beach Boys and Motown influences, it is more than welcome:

The song structures vary, and the recording techniques (drum tracks from iPhones, etc) just about guaranteed that the result would not be ordinary. However, they did not guarantee it would be such a great listening experience. That's where Fleming's talent comes in.

Foxygen's Jonathan Rado guests here, and Fleming claims they're still all on good terms. But really, if the band breaks up and they all go 'round making solo albums this good, I wouldn't miss Foxygen itself. But it'd be cooler if they did both. My Friend Fish is out today (Oct. 29) on Western Vinyl.

I've listened to all cuts on this album, and I have to say there isn't a boring cut.. Every tune is unique and capturing. I find it refreshing and look forward to Fleming's next solo effort