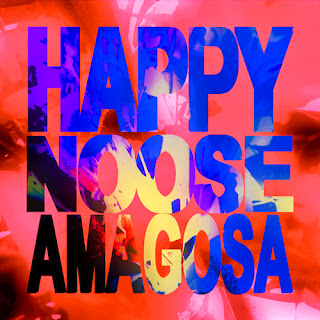 Happy Noose is a trio, playing a darkly psychedelic, heavy yet upbeat take on punk and darkwave music. In their 4-song EP Amagosa I hear traces of Joy Division (whose unreleased "Pictures In My Mind" they cover), Peter Murphy and the solo work of Richard Lloyd - the music is evocative, as is the voice of lead singer Ryan Scott, who conveys a lot without a lot of inflection. The band consists of Scott (vocals, bass), Timothy Grisham (guitars) and John Dahlin (drums). All three previously played in different bands, but they bring together their experience into a unified approach that's somehow dark and evocative yet upbeat and exhilarating, with crashing drums and guitars that alternately slash and swirl.

The second track, "Eye of the Storm" has some beautiful guitar work, and the Joy Division cover shows their (and Joy Division's) punk roots clearly. The final track is "End Song", and it bears a strong resemblance to "Pictures In My Mind", but the band stretches it out to over 4:00 with some terrific guitars.

Amagosa is out now (released Oct. 1), through Dead End Social Club Records and was produced by Tim Green (The Fucking Champs, Nation of Ulysses). It's terrific, a bit of a time capsule in a 4-song EP. I eagerly anticipate more from these three.