REVIEW: King Khan and the Shrines - Idle No More 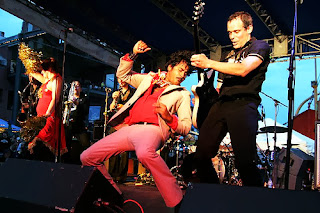 Given this blog's love of garage rock and soul music, I'm not sure how we haven't written about King Khan before, but we're about to fix that.

Let's get the preliminaries out of the way. Mr. Arish Ahmad Khan is a Canadian who's been playing in garage and soul bands since the mid-90's. His wild James Brown meets Iggy Pop stage persona is the stuff of legend. Prior to Idle No More, he hadn't released a record for 6 years as he went through a very rough stretch following the death of some close friends and other challenges that found him landing in psychiatric hospitals, Buddhist monasteries and diving deep into the culture of indigenous peoples.

Idle No More is simultaneously a cathartic release, a street party and a serious artistic statement from a man more known for wild stage antics than gravitas.

Equal parts soul and high energy garage rock, Idle No More has a deep party groove that reminds me more of Brian Jones-era Rolling Stones than anything. Few current bands use horns like this.