REVIEW: Elvis Costello and The Roots - Wise Up Ghost 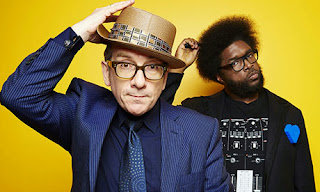 It was inevitable that Elvis Costello and The Roots would collaborate. Costello has long been a great student of American soul music, dating back to Get Happy!, his 1980 amphetamine-paced rock'n'soul classic. American R&B has informed Costello's songwriting throughout his illustrious career. And there is no better contemporary ensemble of R&B players than The Roots.

I love this record far more than I expected to, however. These collaborations often come off forced and mildly uncomfortable. But there's a genuine fusion of styles here - The Roots giving themselves completely to the compositions and serving the songs well. Costello, meanwhile, didn't just give The Roots his latest batch of songs for them to transform, but instead brought compositions particularly well suited to The Roots' style of musicianship and deep chops. And wow, is Ahmir "Questlove" Thompson some kind of drummer!

Here's a taste, the lead track "Walk Us Uptown":


One particularly standout song for me is "Wake Me Up", which has this slinky groove but then throws down this nasty guitar line from Kirk Douglas, an aural bolt of lightning suddenly appearing over the lake on a calm summer night. Float like a butterfly, sting like a bee! Done here live and looser than the recorded version:

Along the way on the CD, Costello digs back into his own lyrical history to recast "Pills and Soap" (Punch the Clock, 1983) into "Stick Out Your Tongue", shifting the mood from creepy to downright though appropriately terrifying. And "Refuse To Be Saved" here updates "Invasion Hit Parade" from Mighty Like A Rose.

While the music on Wise Up Ghost is somewhat controlled on the surface, it crackles underneath, resulting in an underlying mood that is urgent and dark, a world spinning off its axis, a sound and feel that The Roots music and Costello's words and melodies seem custom made to share.

Here's a video with Questlove and Costello discussing the collaboration and Costello's background:

Overall, this is sophisticated and unique music, matching a uniquely gifted and thoughtful writer with amazing players.  Highly recommended - easily one of 2013's best CDs.

Disappointing, for me anyway. I don't find anything especially interesting about the grooves, and while Elvis sounds great, it all feels out of place to my ears.

Couldn't disagree more, EC and Questlove, phenomenal collaboration. Love the way EC's vocals ride the grooves--so does QL (Jim, thanks for that live clip, look at QL smile at EC's clever phrasing at one point).