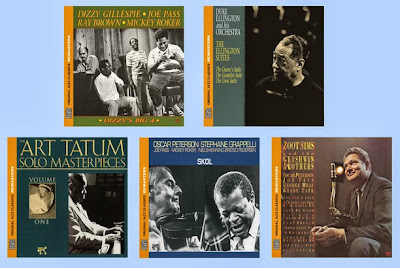 The Concord imprint Pablo Records, celebrating the 40th anniversary of its founding, has issued five more classic, somewhat idiosyncratic jazz masterpieces in September. They are all excellent quality remasters of the original albums, and each features bonus tracks, some never before released.

The three Ellington Suites in this release were recorded at different times: The Queen’s Suite in February and April 1959 (written for and dedicated to Queen Elizabeth II, but not widely released until 1970); the Goutelas Suite in April 1971; and the Uwis Suite in October 1972.

“Ellington would record his orchestra at his own expense, and then stockpile the recordings,” says Nick Phillips, Vice President, Catalog and Jazz A&R at Concord and producer of the Original Jazz Classics Remasters series. “These were recordings that were later sold to Norman Granz, who had the good sense in the ’70s to collect these then-unreleased suites on one album.”

And according to Ashley Kahn, who wrote the liner notes for this reissue, “this latest edition of The Ellington Suites adds a studio discovery: the never-before-released ‘The Kiss’ is a track recorded in 1972 at the same session that yielded the Uwis Suite. [It] is included herein as a reminder of how — all the way to the end of his timeline — Ellington was at work at new creations, ever intrepid and ever expansive. Today The Ellington Suites, music he produced to his specifications and at his expense, are as powerful a statement as any to the remarkable consistency that colored the entire, storied career.”

Recorded in September 1974, Dizzy’s Big 4 provides a snapshot of the bebop pioneer still in superb form at age 57. “Joined by a rhythm section of fellow Pablo all-stars, Diz is heard at his bebopping best in a compelling mix of Gillespie classics (‘Be Bop’ and ‘Birks’ Works’), a then-new Gillespie composition (‘Frelimo’), and standards (‘September Song’ and ‘Jitterbug Waltz’),” says Phillips. “The sheer joy of four like-minded musicians spurring each other to new musical heights is palpable throughout this Pablo classic.”

The reissue includes two bonus tracks, previously unreleased alternate takes of “Russian Lullaby” and “Jitterbug Waltz” — both of which are significantly different versions of the same songs that appeared in the original release. Like the Peterson and Sims albums in this reissue series, Joe Pass plays some great guitar, and like the Peterson/Grappelli disc, Mickey Roker is the drummer.

There is a funkiness to these proceedings that reflects the times - proof, it it were needed, that great artists like Gillespie are able to both draw from and rise above the times. This is a delightful set. Check out the interplay between Gillespie's and Pass's solos on "Be Bop":

Recorded live at Tivoli Concert Hall in Copenhagen, Denmark, on July 6, 1979, Skol features the six tracks from the album’s original LP release, plus three previously unreleased bonus tracks from the same performance: “Honeysuckle Rose,” “Solitude,” and “I Got Rhythm.” It's an interesting album, and of course Peterson was still on top of his game in 1979 - he continued to make good albums, having produced one of his best as late as 1995. Grappelli is wonderful - spirited, with a light, airy touch. The two play wonderfully off one another, and there's also some great jazz guitar from Joe Pass, and Neils Pedersen and Mickey Roker contribute bass and drums, respectively. It's great to hear pros like Peterson, Grappelli and Pass solo on jazz standards like these. Here's "Makin' Whoopee":

Recorded in June 1975, Zoot Sims and the Gershwin Brothers is a set of ten well-known Gershwin classics. Sims plays it fairly straight, backed by Oscar Peterson on piano, George Mraz on bass, Joe Pass on guitar, and Grady Tate on drums. He has some excellent solos, yet the full set is near perfection - not a note out of place. “It’s arguably the best album Zoot Sims ever made,” says Phillips, “not just on Pablo but in his entire career. It’s that good. He sounds absolutely amazing on this album.”

From the notes: The Art Tatum Solo Masterpieces, Vol. 1 got under way with an evening session in December 1953 where Tatum walked into the studios of Radio Recorders in Hollywood with a portable radio. He sat down at the piano bench, opened the first of many bottles of Pabst Blue Ribbon (provided by Granz), listened to about a half hour of UCLA basketball and said, “Let’s go.”

“From there, the music poured forth to produce 69 masters over two days, nearly all on first takes with no playbacks,” says Tad Herschorn in his new liner notes to the reissue. This album contains 16 tracks of Tatum's fluid, adventurous piano, and that's it. Tatum goes where he will, without having to worry about accompaniment, and it's an exhilarating trip.

More information on all the releases available at the links above, or at Concord Music Group's website.

I'm curious about the unreleased material, but I think all of these records have been more-or-less available for a decade or more. I've been listening to the Zoot record and Dizzy's 4 for close to that long.