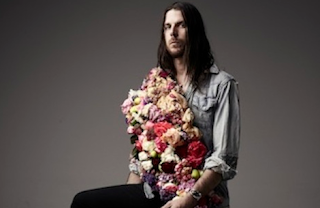 We praise a lot of rough, raw and lo-fi music at this blog and for good reason. But we appreciate great music of any flavor. Jonathan Wilson's Fanfare is a sweeping CD of major ambition, exquisitely recorded, carefully conceived and meticulously performed, unabashedly hearkening back to the glory days of Laurel Canyon '70's folk rock. Fanfare is as hi-fi as it gets. And I love it!

So how does a young guy making his 2nd record line up Graham Nash, David Crosby and Jackson Browne to help out on vocals, Mike Campbell and Benmont Tench from Tom Petty's Heartbreakers on guitar and keyboards, and Pat Sansone from Wilco to arrange and conduct strings? You have great songs, that's how, and something truly magical going on that other musicians of substance want to be a part of. This is all on top of Wilson himself playing a staggering array of instruments, plus having his own very capable band.

Fanfare comes right out of the box with the title track, a sweeping nearly 8 minute, piano-centered beauty. It's cinematic, addictive, incredibly well played. Wilson himself explains on his web page:  “‘Fanfare’ as a word, represents a fanciful showing, a bodacious movement of energy, a celebration of sound. Something to signify an arrival, a special occasion. A fanfare follows no rules. In this case, it’s also the opening song, it’s the gateway for the rest of the record."

Certainly Fanfare follows no rules as it moves along on its 14 song, 78 minute trippy and deeply rewarding journey. Wilson's own web page describes the CD as "grandiose", which, while not a word I've ever read in a band's own marketing materials, is fair in the best sense of the word. Websters dictionary's second definition: "Impressive because of uncommon largeness, scope, effect, or grandeur". That's it, that kind of grandiose is what's going down here.

The second track "Dear Friend" has grown on me a great deal after multiple listens to the CD. As occurs on many songs on the record, what first appears to be a bridge instead turns out to be a gateway to something more like an entire other song, a gigantic left turn where you get to see what's behind door number two, in this case, wah wah pedals and a seriously trippy work out.  The "official" video:

The most immediately accessible song on the CD is the impossibly catchy "Love to Love", a perfect pop gem and an ode to making one's way to, and one's music in, Southern California:


And on and on, the discoveries and delightful journey continue, each song vastly different from the one that precedes it, and full of its own turns, nuances and surprises. When I first heard the CD, I thought well, maybe this song, "Cecil Taylor", sounds a little too much like Crosby, Stills, and Nash. Until I read the credits and realized, man that is David Crosby and Graham Nash, who I guess are allowed to sound like themselves! And it's a very cool song of freedom, the title referencing the pioneering free jazz pianist who once played on the White House lawn during the Jimmy Carter (and C, S & N) years.

In some ways these superstar guys playing on this record is a generational passing of the torch. They know what it's like to write great songs and make dynamic music of the highest quality, so wanting to be part of Fanfare makes complete sense. It's not like one of them or their peers is going to write a batch of songs this original and urgent today.

And while the classic folk rock influences are certainly there, this is highly distinctive and even idiosyncratic work. Wilson has a strong writer's voice and brings an amazingly sophisticated understanding of composition and recording practices here. The use of strings, horns, backing vocals, harmonies, solos, etc. is so remarkably well done here.  It's obvious he's hears all this in his head, plays most of the instruments himself, but then augments that with the very best dream team of people he could possibly assemble.  And Wilson takes all kinds of risks, the sort that will reward you if you dig deep and give this CD repeated listens.

I could single out nearly every song here, but would be remiss if I didn't mention the perfect country rock story song "Moses Pain", "Future Vision" which drops a little John Lennon moment and is a song I suspect Lennon himself would have deeply appreciated, and the grungy "Illumination" where Wilson plays all the instruments and locks on a Crazy Horse-worthy rock groove.

You can hear the entire CD at SoundCloud right here:

But no one can appreciate Fanfare on a single listen or even 2 or 3. You need to digest this. And thus you need to own it. Fantastic stuff, Fanfare will finish high on my best of 2013 list.

And in closing, my personal thanks to musician and Notre Dame recruiting web site guru Mike Frank and my nephew Tom Desmond who both turned me on to this. I could have missed this one and that would have been a great loss.

Richard Metzger over at Dangerousminds.net was gushing over this the other day.

I'm still underwhelmed. I was very into Archer Prewitt's underrated album Wilderness back in 2005. And I have been a fan of Bill Fay's intimate recordings for a long time. And of course 3rd/Sister Lovers from Big Star. So as good as this album may be, it's not yet offering me anything found in greater abundance in records from those aforementioned artists.

Maybe in a few more listens.